From pauper-to-prince: developers are now the buying centre of purchasing tools.

Today, Peter Levine is an influential venture capitalist; his opinions are closely listened to and he controls large pots of money. But his career didn’t start out this way. In the 1980’s and 1990’s, Levine worked as a software engineer. He describes the extent of his influence on tool purchasing decisions at the time as follows: “When I was a developer, I had no budget and I couldn’t buy a pencil, when pencils were popular. I couldn’t buy anything. Whatever central IT had ordered, that’s what showed up on my desk.” Oh, how the times have changed. Developers have become powerful influencers in their own right, and for the tool vendors of this era, they are a crucial target.
Peter Levine himself describes the transition of developers from pretty powerless line employees to kingmakers as follows, based on his experience with tech startups.

One of the most notable transformations over the past 5 years has been the pauper-to-prince of the developer as a buying center within a company. […] As software infiltrates every part of our economy, [developers are now] the lead innovators and they’re the lead buyers in companies. What we see are many of our startup companies now deliberately selling to developers as the first wedge point into an organisation. [Developers] all very much have opinions and buying potential.

— Peter Levine on the a16z podcast (edited for clarity)

As our surveys are designed to reflect the voice of the modern software developer, we thought we’d get some data on how influential they actually are. For this chapter, we only consider professional developers in organisations that buy tools or components (11% of these developers don’t). We also exclude lone wolves: developers who work on their own and where a purchase decision is purely personal.

To some extent, the traditional purchasing structure that Levine referred to from his days as a developer is still alive: the higher up in the organisation, the higher the decision power on tool purchasing.  We consider 4 organisational roles of developers: front-line coders, team leads, product managers, and technology CxO’s. Front-line coders represent 47% of respondents in our survey, the others 36%. An additional 8% combine multiple roles. For the purpose of this analysis, they behave like a mix of the latter three roles.

The control of company leaders over budgets and decisions is of course completely expected. Even in small organisations, decision power would rest with more senior staff, especially for making final decisions on team-wide tools and for budgeting.

This said, the influence of developers on purchasing decisions is abundantly clear. 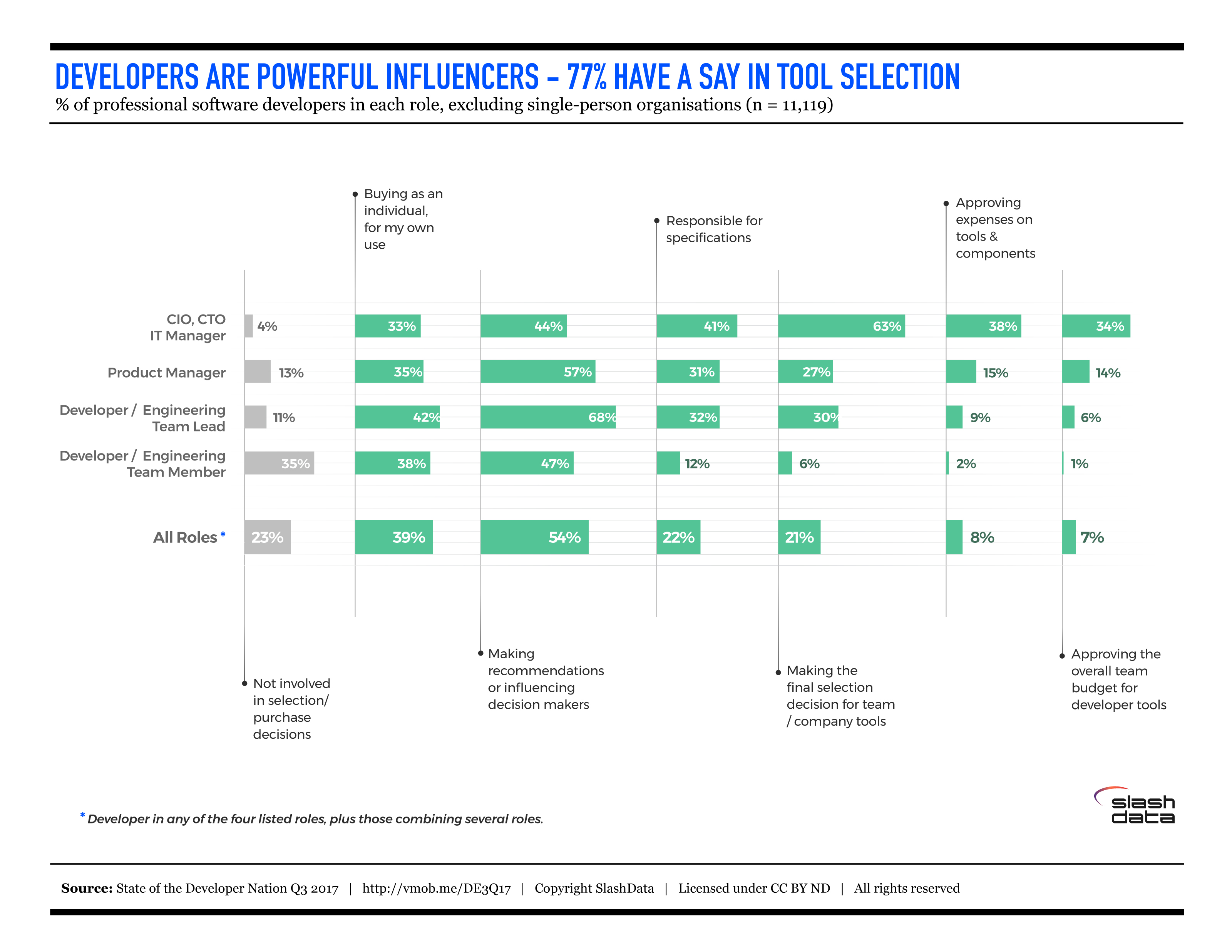 Almost all developers with a leadership function no matter how small – between 87% and 96% of them – are somehow involved in purchase decisions. Even among front-line developers, the bottom rung in the developer organisation, this is still 65%. Between half and two thirds of developers are in a position to make recommendations or influence decisions. In particular, team leaders (i.e. senior developers) are big influencers (68%).

More than a third of developers (incl 38% of front-line developers) acquire tools for their personal use. First, this means they have at least some decision power and at least a small budget to spend. In aggregate, this by itself is an important market. Second, this increases their influence in their organisations and allows them to act as a ‘wedge point’, as Levine calls it. They can introduce tools in an organisation for personal use or at small scale, and then have a proof point to demonstrate the tool’s value to others, based on actual experience and results. As such, they can evangelise tools in larger organisations. Targeting individual developers therefore becomes a viable strategy for enterprise sales.

Up to a third of mid-level developer leaders (team leaders and product managers) hold the pen when writing specs for tools (32% and 31%, respectively), or even get the final word on which tool to adopt (30% and 27%). Again this indicates that catering to the needs of individual developers is becoming crucial. Even when in a majority of cases developers still need management to sign off on purchases, the days are over when an inadequate tool could be pushed from the top down because it appeared interesting to CFO’s or top brass.

Only for budget and expense approvals, the power still lies elsewhere in the organisation. Even on the CTO/CIO level, only 34% and 38% have budget and expense control, respectively. This makes sense – budgets are never unlimited, and financial decisions rarely belong to function leaders. While this may affect pricing and positioning of developer tools, it will have limited impact on which tools (out of a set of competitors) get the most traction. The power for that decision is more and more found at lower organisational levels.

In conclusion, developer experience matters – a lot! From our Developer Program Benchmarking research, we know that developer satisfaction is highly correlated with adoption. The world of developer tooling has indeed fundamentally shifted since the days of Peter Levine’s career start as a developer. It is no longer the purchasing department you need to woo, but the developer who will use your tools on the floor, and their direct team manager.

As a research company entirely focused on developers, we will follow this evolution very closely. We’ll also gradually be introducing the level of developer influence as a filter in our Dashboard service.

This article is part of the State of the Developer Nation Q3,2017 report. Download the full report!