The evolution of handset business models: From source of profits to distribution channel

The evolution of the PC and mobile handset industry have been mirror images of each other, as both saw two distinct disruptions: a new market disruption, followed by a low-end disruption. Sameer Singh and Michael Vakulenko, VisionMobile Strategy Director explain how the shift from integrated companies to modular competitors will pressure hardware profit margins across the industry, leading to the emergence of a new business model, i.e. hardware-as-distribution 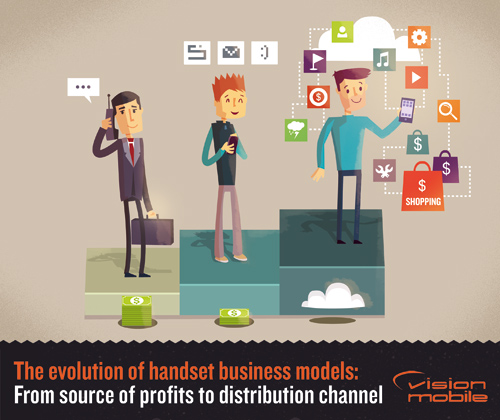 The mobile handset industry has already seen two waves of disruption: A “new market disruption”, led by Apple, and a “low-cost disruption”, driven by Google and its Android platform. Each wave created distinctly different business models that completely realigned competitive dynamics in the industry. Where do we go from here?

We believe that the coming, third wave of disruption will again reshuffle the deck for all industry players. We will see growth in a new class of business models, where handset hardware is no longer seen as a source of profits, but is treated as a distribution channel for digital products and services.

Let us explain why this is the next natural step in the evolution of the mobile handset industry. 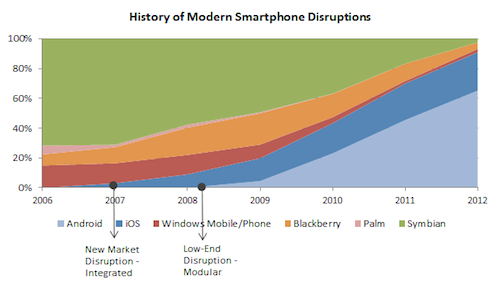 As industry observers are keenly aware, Android and iOS currently dominate the smartphone landscape in terms of shipments as well as developer mindshare. This duopoly is a result of two major disruptions that the mobile industry saw in rapid succession. The first was a “new market disruption”, caused by the iPhone, which introduced the paradigm of mobile computing. The second was a low-end disruption, caused by the Android operating system, which reduced barriers to entry to the smartphone market and caused deep commoditization.

Clay Christensen defined a “new market disruption” as one that changes the basis of competition in the marketplace and initially competes against non-consumption. In the mobile industry, the iPhone brought the concept of mobile computing to the mainstream market and initially did not have much of an impact on incumbents. Over time, performance improvement enabled a wider range of tasks to be performed on the iPhone, which pulled in customers from competing legacy mobile platforms (such as Symbian, Blackberry, Windows Mobile, etc.) and personal computing platforms as well.

In contrast with this dynamic, a “low-end disruption” takes root in low-end segments of an existing market which may be overserved. Improved technology enables new business models to emerge that are based on lower cost structures. Low-end disruptors with extendable business models then move up-market by offering “good enough” products at lower price points. The Android operating system was a classic “low-end disruption”, as it introduced a modular platform and ecosystem that allowed less experienced handset makers to build compelling products without major investment in software. 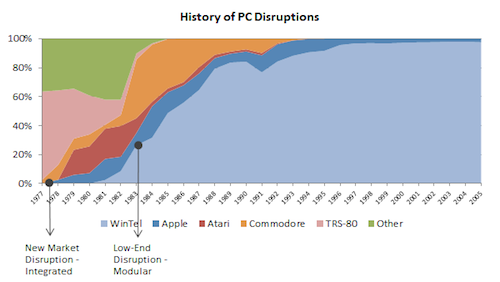 Curiously, this dual disruption pattern was also seen during the early days of the PC industry. Apple Computer caused the first “new market disruption” by introducing the personal computing paradigm, while the second, low-end disruption was caused by clones of the IBM PC, running Microsoft operating systems and productivity applications (for example, Compaq, Gateway, Olivetti, Dell, HP and later numerous Asian OEMs). Of course, the time frame between these disruptions and the resulting evolution was much longer in the PC industry. This was because mobile adoption was driven by the consumer market (“bottom-up” diffusion or “grass roots” adoption). In the PC industry, high acquisition costs ensured that adoption was driven by the enterprise market followed by smaller customers as costs reduced (“top-down” diffusion or “trickle down” adoption). Mark Andreessen explains the idea here.

There are some very interesting patterns that emerge when we compare the evolution of business models in these two industries. The first disruption was created by a product that offered integrated hardware & software, while the second was caused by the introduction of a platform that removed entry barriers for OEMs and hence, increased competitive intensity and reduced margins on hardware. Let’s take a look at the evolution of computing business models from the perspective of value chains. 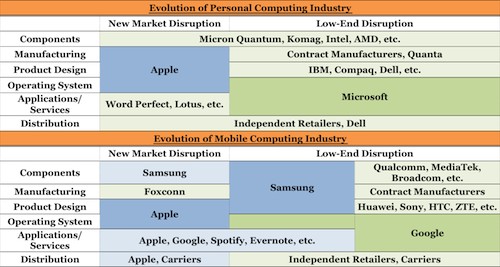 The chart above compares the evolution of business models and value chains in the personal computing and mobile computing industries. Underserved sections of the value chain need proprietary architectures or vertical integration to maximize performance, while modular architectures can provide more cost-effective solutions in overserved sections of the value chain. “New market disruptions” created product categories that faced early technological challenges, especially at the hardware & OS layers. In the PC days, Apple became the dominant (and most profitable) player in both industries, as it was integrated at those underserved layers. This was followed by the entry of modular players, led by Microsoft in PC and Google in mobile. The initial modular competitors were inferior to Apple’s integrated approach, but were relatively less expensive and were aimed at less demanding customers. As hardware performance improved, the industry began to get more crowded with the entry of IBM PC clones and low-cost smartphone vendors like Huawei, ZTE, etc. At this point, the focus began shifting to the next point in the value chain that was underserved, i.e. the applications/services layer.

The reason that Microsoft was extremely successful is that it was vertically integrated across the operating system and applications layers. Similarly in mobile, Google has successfully integrated across the operating system (Android), browser (Chrome) and services layers. The clear pattern that emerges here is that profits should accrue to those companies that offer proprietary solutions at the layers of the value chain that are still underserved. Once the segment is overserved, price competition from inferior, modular competition proceeds to destroy margins.

The impact of value chain evolution on profitability was very clear in the personal computing industry. According to McKinsey’s estimates, the share of industry profits captured by integrated computing companies dropped from 80% in 1986 to just 20% in 1991. During the same time frame, the suppliers of components, software & services increased their share of profits from 20% to 31%. The remaining 49% of value generated by the industry evaporated in the form of consumer savings. This “profit share” structure mirrors the current state of the mobile industry, where Apple and Samsung (the two most integrated hardware companies by most measures) have captured nearly all of the industry’s operating profits. Apple’s products are integrated from the software to the retail interface, whereas Samsung’s products are integrated across components and hardware.

The industry balance will continue to change as the present-day leaders will see growing competition from companies with lower cost structures. Vendors like Huawei, Lenovo and various regional OEMs are already very strong in ”less demanding” markets (like India, China, Africa) and are highly motivated to move upmarket.

The Third Disruption: Hardware as a Distribution Channel

As there will be fewer profits left in the handset industry, a third wave of disruption is a certainty.

In the PC industry, once the dominance of modular architectures led to deep commoditization, hardware just became a distribution channel for software (the operating system and applications). The evolution of the mobile handset industry works out slightly differently. Google essentially destroyed the software licensing business model by giving the Android operating system away for free. Consequently, the cost of owning a proprietary operating system became unviable for most players (like Motorola, Sony Ericsson or Nokia) because hardware margins became severely pressured. This ensured that industry focus and profitability would accrue to the next layer of the value chain that was underserved, i.e. Google’s core business – online services.

In the PC industry, OEMs like Dell and Sony used the “hardware as distribution” approach to charge software vendors to pre-install applications on their devices and boost margins. In the mobile industry, we have seen already numerous companies follow this model to create a competitive advantage by leveraging established ecosystems. Many service companies like Baidu, Dropbox, Opera, Facebook and Whatsapp have attempted this strategy by partnering with OEMs to pre-install or use their services by default.

Another variation of this strategy, followed by services and content companies, is selling relatively high-end hardware at cost, in order to enable deeper penetration of the company’s core services. Companies like Amazon and Xiaomi compete asymmetrically with true hardware vendors in order to expand their consumer base. Both strategies have been quite successful – Amazon has expanded Kindle Fire availability to numerous countries based on strong sales and Xiaomi expects to double its handset sales to 15 million this year. Many more services companies like Evernote and Spotify are contemplating the low-cost, “hardware as distribution” strategy in the future. We have already seen a smartphone called SmartNamo dedicated to an Indian politician, Narendra Modi. Will we see a “Justin Bieber phone”, “Shah Rukh Khan phone” or even a “Real Madrid phone”?

Rapid commoditization will only make it easier for companies to convert hardware into a distribution channel. The tablet industry has seen more price competition than the smartphone market in the absence of carrier-driven price distortions. As a result, commoditization has been much more rapid and the “hardware as distribution” model has come to the forefront in a very narrow time frame. Low-cost tablet hardware has allowed companies like Newscorp to enter the industry with preloaded, education-focused content. We have seen similar models emerge in South Africa, India, China and many more countries. As price competition increases, commoditization pressure in the smartphone industry, variations of “hardware as distribution”, could become one of the primary drivers of profitability.

The expected shift in handset business models will reshuffle the deck once again. Companies that catch the trend early will find plenty of opportunities to create competitive advantages and thrive in the new environment. Those who miss it will be destined to fight the losing battle of “competition to the best”, which Prof. Porter calls “the granddaddy of all strategy mistakes”.