What happens at a Future Developer Summit

On September 24 & 25 we opened the doors to the fourth edition of the Future Developer Summit. With Diversity (openness & inclusion) as the overlying theme, we welcomed 60 participants from 30 companies across industries and had prepared for the 1,5 days full of keynotes, two fireside chats, 12 lightning talks and two workshops, including some fun, interactive games.

Experience sharing is a must in the Future Developer Summit and we strongly believe in learning from each other’s mistakes and real career experiences. Let’s see how that went.

Open source as a drive for decision-making

Willie Tejada (VP and GM of Developer Relations and a Chief Developer Advocate, IBM) kicked off the Summit with his keynote and what better way to do it than talk about open enterprises and how companies benefit from using open-source software. He also mentioned IBM’s “Call for code” initiative that addresses climate change and natural disasters.

Inclusion in your DevRel team

Remaining close to openness, Maru Ahues Bouza (Director of Developer Relations and Advocate for Diversity and Inclusion, Google) followed the keynote with a fireside chat. Maru had her story to share:

–      When Maru started working in DevRel, she was the only woman and the only Latina (she is from Venezuela) in a team of 40 ;

–      Specific diversity and inclusion goals have been set in hiring ;

–      When it comes to strategic hires for building her DevRel team, she first hired developer advocates (called them “engineers with social skills”), then a program manager who created a programs team, followed by the operations team, and the strategy team.

What does “diversity” mean to Maru? She wants everyone in her team to feel included and to feel that their contributions matter: “I don’t think you can do diversity well if you don’t focus on inclusion. Hiring is important but making sure everyone in your teams feel included is critical. It is super important to set your people up for success.”

How do you build a developer community from scratch?

That’s the question Diego Moreira (Director, Products & Partnerships, Facebook) took on answering with tips to build a 200k+ developer community from scratch. He pointed at educating, helping the innovation process, and bringing people across the globe together as the three main components of Facebook’s strategy. He also shared Facebook’s initiative in Sudan.

How can diversity help your team?

–      Developers in certain regions (Japan, China) prefer materials to be translated into local languages whereas in other regions (Germany) developers are fine with English ;

–      DevRel teams need to be sensitive to local and cultural norms, even when planning the start and end times of meetings ;

–      Failing is learning. Lori also shared her personal failure story about how she made it to TechCrunch, with a funny twist. While at Motorola, her name was attached to an article referring at the upcoming Motorola device and mentioning it would not be reflashable. Developers were not kind in their feedback, but as she said “failures make for good stories down the road” ;

–      Ensuring diversity within an organization takes constant work. Different people and cultures have different expectations, and you should never underestimate a minority faction.

Leandro Margulis (VP & GM of Developer Relations, TomTom) was all about offering real tips we can start using as soon as possible:

–      In the sign-up form, instead of asking for first and last name, just ask for full name and do some smart processing in the background to figure it out ;

–      When possible, use inclusive maps with place names in local languages ;

–      “Your developer program should cater to real persons and people – not to the typical, and wrong, stereotype of a developer one gets from the movies” Leandro said.

What have your failures and successes taught you about building four developer relations teams? That was one for Tim Falls (Director of Community, DigitalOcean). He stated that “systemic organizational issues are fixable – if they are acknowledged as broken” and shared a story about revising a team compensation structure that was unfair and misguided. Inclusion is always key, so he offered tips and lessons learned from working with a team member with mental illness: acknowledge and honor the need for accommodations related to their mental health, make sure HR is in the loop and seek help and feedback from mental health experts when you need, be open and understanding and always try to learn as much as you can so you can meet the needs of your team members. “Some teams are too good to stay together. You need to foster an environment that nurtures individual expansion and attracts talented people to achieve healthy retention” he said about having such an environment that helps people excel and grow, even if they leave to join another company or start their own.

The first day was wrapped up in a relaxed atmosphere with dinner, wine, and a Silicon Valley sunset. 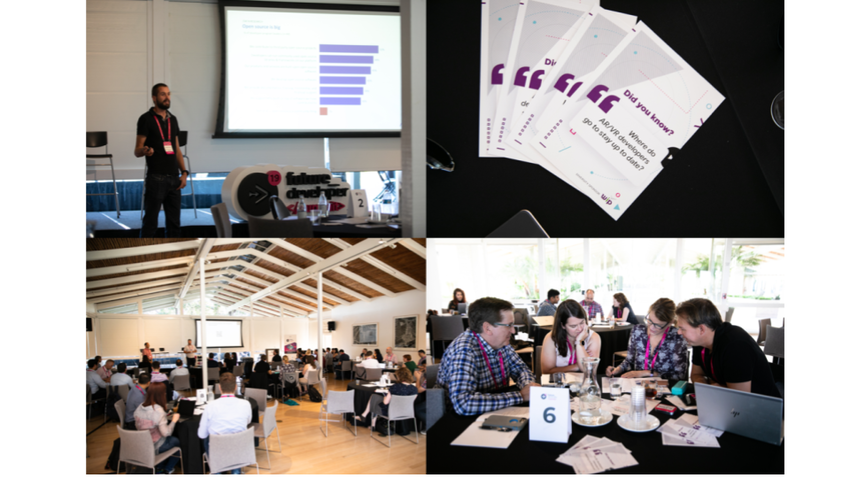 How and why to engage Millennial developers

Diane Prescott (General Manager of Business Planning, Microsoft) kicked off day 2 of the Future Developer Summit with a sociocultural approach towards millennial developers.

–      They are more likely to work in organizations that have been operating for less than 10 years;

–      They are more likely to be primary decision-makers for cloud-only apps ;

–      They leverage the community and their personal networks, significantly more than earlier generations ;

–      “It is best to meet customers and developers where they are, with all their unique preferences and attitudes and developer programs need to take this into account.” Diane said and emphasized that it is equally important to look not only at your customers but also learn from your non-customers.

What does “relations” in developer relations mean?

The second fireside chat of the event was led by Quinton Wall (Senior Director of Developer Marketing, Twilio) who took over in placing “relations” in “developer relations”.

–      “Developers don’t necessarily associate themselves with a company, but rather with a technology and a community – even if developers change their employer, they remain loyal to the technologies they are familiar with” ;

–      When it comes to diversity and inclusion, he made a point of looking beyond university graduates and has made hires directly from hackathons – people who learned to code without a university degree ;

–      While it is important to grow your developer community, it is equally important to look at empowerment and activation: how to make your developers successful. It is paramount to understand what your developers are doing and how they are using your platform. They might even use it for completely different purposes than what you built it for. The community manager and others should constantly monitor developer feedback and pass it on to product teams ;

–      People talk to people, not companies. First focus on hiring strong developer advocates – people advocating FOR the developer inside the company – and then community managers developers can talk to ;

That was one for us. As the analyst of the developer economy, we /Data, through our data scientist Michael Carraz, presented the latest on developer trends:

–      Which are the developer persona characteristics ;

–      What are the upcoming trends in development ;

–      What are the features each successful developer program should offer.

Workshop time: How to build a developer program from scratch with $2 million.

After being updated in all industry trends, it was time for our first interactive workshop. Time to put words into action – or even more precisely, put our money where our mouth is. We asked the participants to spend a virtual budget of $2M towards building from scratch a developer program within 12 months. They needed to prioritize and decide where they would invest in people and activities. Teams came up with various scenarios based on their assumptions and constraints.

We’ve talked about developer personas in the past. We even run webinars on it. Luke Kilpatrick (Senior Manager, Developer Marketing, Nutanix) discussed the four types of developers they take into consideration when it comes to segmentation:

–       Marketplace developers (they build apps and sell them) ;

–       Developer Required (you need developers to sell your product).

He also discussed developer program success KPIs and gave us all the early hires that are needed in Developer Marketing: content writer, evangelist, researcher, community manager, support engineer. Luke also offered a few quick tips on how to build a developer program from scratch, from the chapter he wrote for our new book “Developer Marketing + Relations: The Essential Guide .”

Developer program leaders often ask how we can help them get the corporate buy-in. Francisco Romero (Head of Open Innovation Programs, Amadeus) addressed this and gave us a peek on how to overcome corporate hurdles to build a developer program. Changing the mindset of top management is a series of smaller achievements including: setting goals that are aligned with the company’s goals and bottom line, creating internal alliances and partnerships on a 1-2-1 level, building the support at different organisational levels, communicating the risks of no action, managing risks and expectations by preparing beforehand to have the means to deliver what is promised.

These are the hottest tips from the lightning talks of day 2:

–      At Cisco, the ideal is to create a diverse DevNet community where software meets hardware and software developers meet network engineers. At the same time, if you want to build great API experiences, you need to listen to developer feedback and create a customized API style guide along with an internal API community and tools. Amanda Whaley (Sr Director of Developer Experience, Cisco) ;

–      Being customer-obsessed boosted our NPS by +20% in just one year. You need customized API strategy for each developer type, you need to earn the right to invest in future value, and ecosystem obsession is a team sport. Acknowledgement, action, and transparency are in the secret sauce for customer satisfaction. | Cassie Divine (Senior Vice President, QuickBooks Online Platform, Intuit) & Jarred Keneally (Director of Developer Relations, Intuit) ;

The first 5 people in your DevRel team.

Back to work. For our second workshop, participants had to staff their DevRel team with its first 5 people. Loads of combinations were presented, but most included: community manager, partner engineer, developer marketing manager, tech writer, developer advocate, support engineer, and partnerships manager.

Brad Meiseles (Senior Director of Engineering at VMware) delivered the closing keynote. The focus was on the Kubernetes community best practices and how it has changed and is still changing the way we work. Kubernetes is now one of the top open-source projects ever and it took 5 years to reach to the top. The reason behind its success is very simple: its community of kindness, open to all, created by developers for developers.

Nothing makes diversity sound better than a live Latin jazz band to accompany the closing dinner. 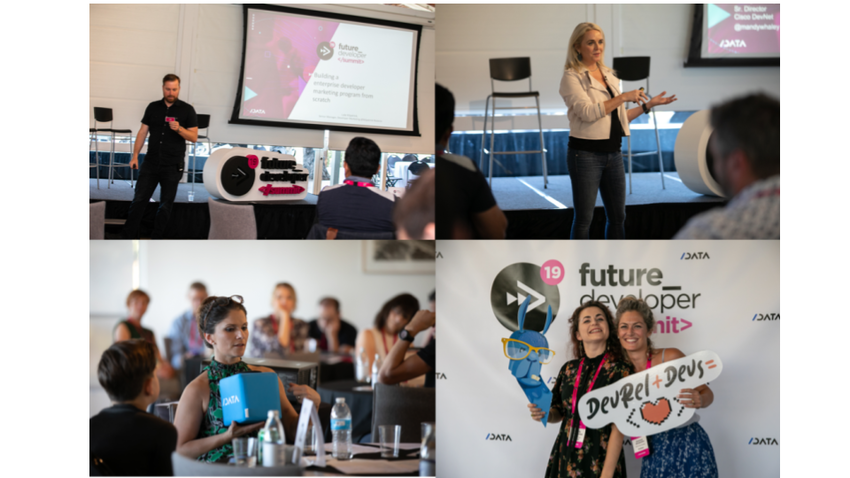