In the last 12 months Mobile Application Stores have evolved from hype to mass-adoption and even to currency; building an App Store marketing story can increase your valuation, even if no-one agrees what an App Store is. The mobile industry, from CEOs to developers, is engulfed in an app store hysteria such that everyone (operators, OEMs, and platform wannabees) wants to build one.

Yet the long-term reality will be very different; App Stores will become a dime-a-dozen and smart players will need to seek out where they can add and extract the most value, not what app store recipe they can photocopy the fastest. In this article we ‘ll review the present state of the market, the key App Store building blocks and where will the market be heading in two years. 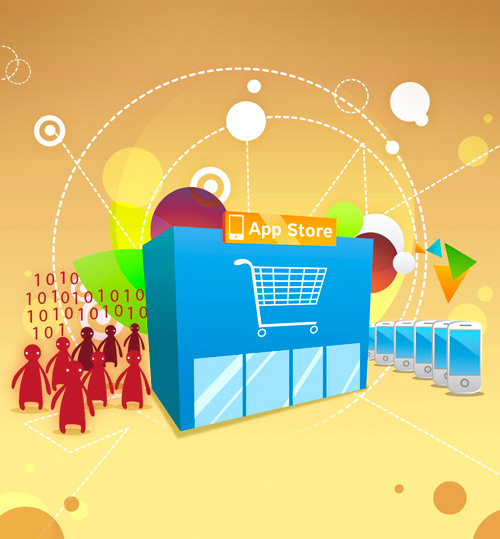 What’s in a name?
What IS an App Store after all? Is it a developer channel, an on-device apps storefront, a way to deploy applications, or an attempt to copy Apple’s model to the last detail?

To understand what App Stores mean we need to trace back into mobile history; BREW, Symbian, Windows Mobile and Palm have long opened APIs to their software platforms, since 2001-2 in fact.. And while technical openness was established 7 years ago, what was lacking all these years was commercial openness; the funnel between external developers and in-market handsets was so thin that very few software players could pass through. It took Symbian six years to reach 10,000 applications, while it took Apple only 6 months (see our earlier analysis). In the first year of operation, Apple’s App Store brought in 65,000+ apps, 100,000 registered developers, 1.5Billion application downloads and availability to consumers across 77 countries through 40 million iPhone and iPod Touch devices sold.

What Apple figured is that streamlining the commercial route to market was more important than opening up APIs in a friendly language – and as part of that taking out the middlemen (operators, content aggregators and content retailers) who were eating 60% or more of the retail price. BREW and GetJar have been following along, too, although somewhat limited in terms of operator certification hurdles (in the case of BREW) and lack of on-device integration (in the case of GetJar).

In this historical context, it is easy to see that App Stores are a developer-to-consumer merchandising channel; a go-to-market vehicle for allowing developers to distribute and retail their applications directly to the end-consumers, while taking out the middlemen from distribution and retailing. In this sense, mobile app stores are the equivalent of JVC (or any other audio equipment manufacturer) allowing musicians to sell direct to consumers, bypassing labels, distributors and online retailers altogether. Sadly, the music business is more complex that mobile.

State of the market – supply and demand
Most of the hype today is focused on the short head of the most successful app stores. Below we have profiled the five most prominent app stores today and analysed them in terms of distribution model, installed base, downloads, applications and revenues, which makes for an interesting comparative reading. Note that our Apple app store revenue estimates are at $700M/year, in-between the conservative estimates from Bernstein and the optimistic (statistically-skewed) Admob estimates. [updated: we understand that Handango effectively gives only 30-40% revenue share developers, a figure which has dwindle from the 60-70% that was 3 years ago]. 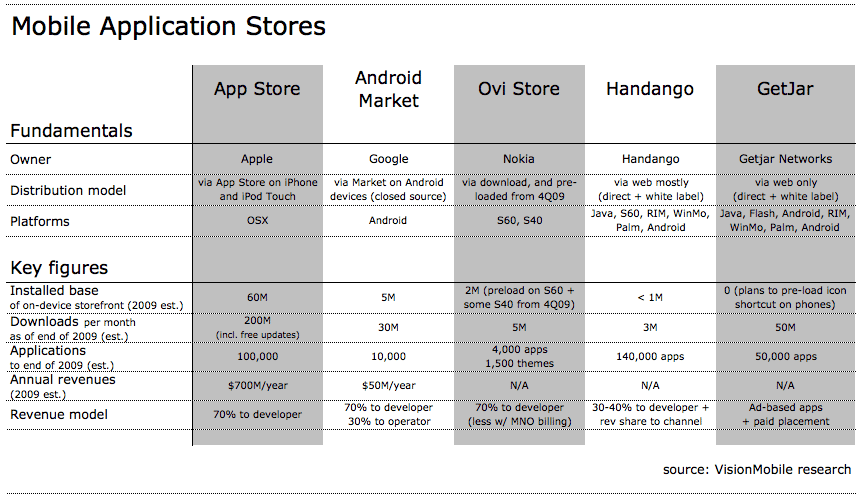 For a slightly deeper dive into the details behind these deployments, Distimo maintains the most extensive comparative table of App Store launches.

One of the most integrated offering is from Mediatek – a chipset vendor powering more than 300 million (!) phones shipped each year – which has launched its own App Store powered by Vogins and SkyMobi. This is a white label app store offered as part of the chipset package and where the revenue is shared among the OEM (30-40%), Mediatek, developers and the operator, according to our sources. In a sense this copies the Qualcomm BREW model (chipset + software + services), but in a very different market where the one-stop-shop hardware+software+app has allowed 10-person OEMs to fill the market with knock-off (‘shanzhai’) phones, selling for 1/5th of Nokia prices.

Key building blocks
To understand the future of app stores one must look not only in their historical evolution, but also in their genetic make-up.

We first analysed the key ingredients for building an app store a year ago – and the receipe still stands. In the next diagram we analyse the five key elements of an App Store and their evolution to the next two years. 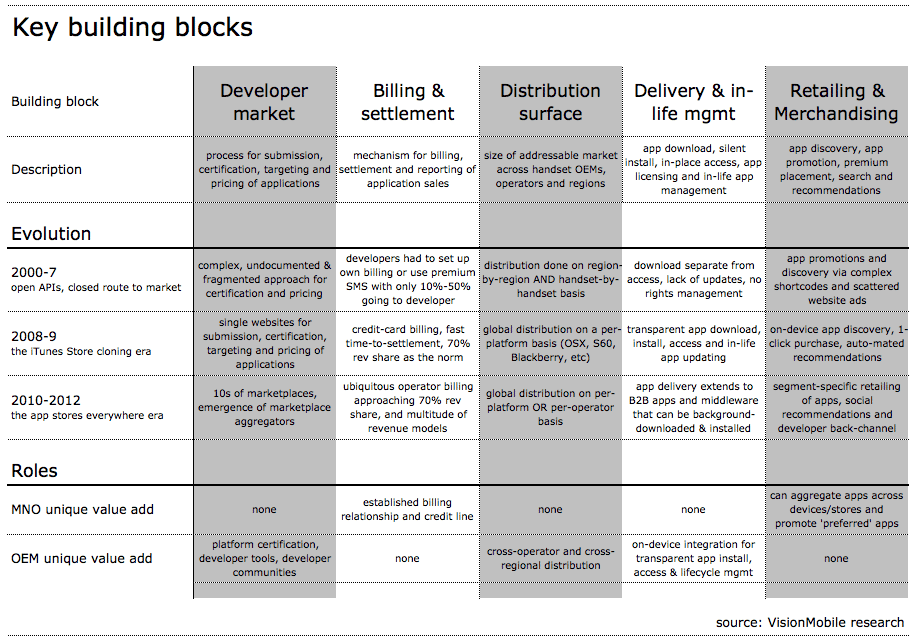 As we mentioned, an App store is a developer-to-consumer merchandising channel. As such an App Store is made up of five key building blocks:

What’s next: we see 10s of developer markets emerge in the next two years. Not only one app store for each OEM, platform and operator consortium (Android, LiMo, OHA, JIL), but App Stores for different consumer segments (enterprise, fashion, kids, elderly, sports, etc). As such we expect the emergence of App Store aggregators, ie entities which will undertake submission and testing of an app against multiple App Store marketplaces.

2. Billing and Settlement: a mechanism for billing, settlement and reporting of application sales. Pre- App Stores, developers had to set up their own billing or use premium SMS with only 10%-50% of the retail price going to developer. Settlement of application revenues used to take weeks or months. App Stores introduced credit-card billing, fast time-to-settlement and a 70% revenue share as the norm.

What’s next: we see operator revenue shares harmonizing to the 70% norm towards the developer, and a multitude of revenue models emerging like subscription, gifting/begging and cross-app billing (where the credit paid through one app is valid for use in another app). The harmonization of operator billing will be critical to the adoption of app stores, removing the last consumer hurdle for mass app adoption.

3. Distribution surface: the size of the addressable market for an App Store across handset OEMs, operators/carriers and geographical regions. Pre-App Stores, developers had to distribute apps on region-by-region AND on a handset-by-handset basis – a true fragmentation nightmare. iTunes Store, Ovi Store and the RIM App Center introduced global distribution on a per-platform and per-OEM basis, offering plenty of room for continual growth of app downloads (and second-order growth in the case of Apple). Already the Ovi Store sees traffic from 180+ countries on a daily basis, and this is via user downloads of the Ovi Store with pre-loads on S60 and selected S40 models coming in 4Q09.

What’s next: With operator consortia like JIL muscling into to claim App Store territory, we will see global distribution across operators as well as across platforms and OEMs.

4. Delivery & in-life management: the mechanism for app download, silent install, in-place access, app licensing and in-life app management. App delivery is one of the most underestimated building blocks for an App Store, as it’s all about the â€˜magic’ happening in the background. Pre-App Stores, users had to download a ringtone or an app, then figure out under which menu this was saved on the handset. Naturally, there was no ability to update the application or apply any rights management to it, leading to rampant side-loading and gradual decline of content value.

What’s next: we see application delivery extend beyond B2C towards B2B apps and middleware that can be background- downloaded & installed. This presents opportunities for App Store owners who can monetise on a per-activation/per-unit basis for remote installing of apps, features or bug fixes on behalf of operators, OEMs or enterprise customers.

What’s next: as with all fast moving consumer goods (from detergent to mobile phones), retailing and merchandising is the most important segment of the product lifecycle. As applications become ubiquitous, we see specialized app stores with segment-specific retailing of apps, inventory leasing for app promotions (CPC or per week rental as already seen in the Ovi Store and RIM App Center), social recommendations (your friends bought this app, so you should buy it too) and developer back-channels (allowing the developer to reach out to their customers via App Store facilities).

Outlook for App Stores: What the next two years hold
We spoke to George Linardos, Nokia’s VP of Product Development for Media and Games who sees the App Store market evolving to the state of the US television networks; i.e. the emergence of a few major cross-regional App Stores followed by 10s or 100s of localized and specialized stores.

This a natural evolution in a crowded, commoditizing market and addresses a very important challenge. “Today’s app stores throw the high value apps together with the low value ones into the same pool. The top-10 listings are based on number of downloads in most cases. There needs to be better segmentation, so that high-quality applications can be seen as quality applications”, notes Sebastian-Justus Schmidt, CEO of SPB Software, a software house which makes 6 of the top-10 best selling applications in the Windows Mobile space and has the best selling product across all platforms according to Handango.

Indeed, the iTunes Store practice of dividing and conquering among application developers does not create, but destroys value – as can be seen from the continual decline in average app price. Schmitt continues “If you expect to get apps for 1 dollar you will get the quality of 1 dollar”. This observation confirms the necessary emergence of specialized stores; from the cheap & cheerful everything-you-buy-is-1-dollar Store, to the premium Store with perpetual updates and 24 hour customer support for each and every app.

Beyond specialized app stores, recommendations will also play a crucial role in merchandising. â€˜People who bought this also bought that’ (aka collaborative filtering) and social endorsement (aka social graph mining) will become key to App Store performance, which is why Nokia has hired some of the brightest minds to work on Ovi Store recommendations. Linardos expects to see major new merchandising and recommendation features appear on the Ovi Store in the next 6 months (perhaps in time for MWC 2010?) and sees Nokia’s global marketing machine as one of the key differentiators in Ovi Store.

Beyond specialisation in App Stores, we expect to also see co-existence of multiple App Stores within the same handset. This is not just a hypothesis. Already LG and Samsung phones shipping in 4Q09 come with four (!) App Stores co-existing within the same handset; one from the OEM, one from the platform provider (Windows Mobile) and two from the operator (SKT – who has their own device- and web- application stores). In this dime-a-dozen picture of the future App Store market, retailing and merchandising becomes an even more strategic element; where the value is in selecting the ‘best’ apps from each application store and auctioning promotion space (paid-for widget real estate) for these apps on the idle screen. This is where JIL and operators should be focusing, rather than trying to photocopy the Apple recipe.

[update:] In response to the many comments, here’s a list of companies who are offering merchandising and recommendations platforms for apps: Apppopular, Appolicious, Appsfire, Chorus, I use this, Mplayit and Yappler.