Platforms 101: Not all mobile platforms are created equal

[The term â€˜platform’ is used for describing things as diverse as social networks, web browsers, on-line retailers and open source software. VisionMobile Research Partner Michael Vakulenko delves into the platform economics to uncover why not all platforms are born equal.] 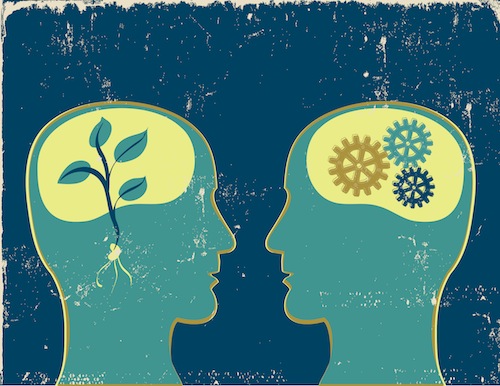 The term “platform” is clearly over-used to the point of losing its meaning. In reality, there are many different types of platforms, each having distinct business models, modus operandi, strengths and weaknesses.Focusing on mobile devices, we can distinguish between three main platform types: software platforms, application platforms and communication platforms. Making a clear distinction between platform types offers valuable insights into competitive dynamics between mobile platforms, including iOS, Android, BlackBerry, Symbian and Windows Phone.

Since different platforms types have very different origins and purpose, it is close to impossible to evolve one platform type to another. And while platforms can be compared in terms of adoption, direct comparisons of platforms of different types is like comparing oranges to apples.

A software platform is a common software stack that is used for developing multiple products. As such, software platforms are optimised for flexibility and sharing of development costs when building products based on the same technology foundations. The technology platform approach is also used in other industries such as the automotive or construction industries. Many open source projects have evolved into successful software platforms, such as Webkit, Apache and Linux operating system.

Symbian is a characteristic example of a software platform. Symbian Ltd. was established by Nokia, Ericsson and Motorola in 1999 for the purpose of sharing the costs of building a mobile software operating system. The Symbian software stack was subsequently used by these handset makers as a basis for wide range of mobile devices introduced in the last decade. Symbian is still the most widely deployed mobile platform ever with over 480 million devices shipped up until Q2 2011. As a software platform, Symbian has been optimised for flexibility in customizations by handset makers and mobile operators.

Symbian served its purpose quite well until Apple changed the basis for competition by introducing a different kind of a platform. Applications, developers and app stores suddenly became more important than serving OEM needs. Changing design focus of the platform proved to be impossible for Symbian and Nokia.  Changing the license terms to open source only  further sidetracked the platform. 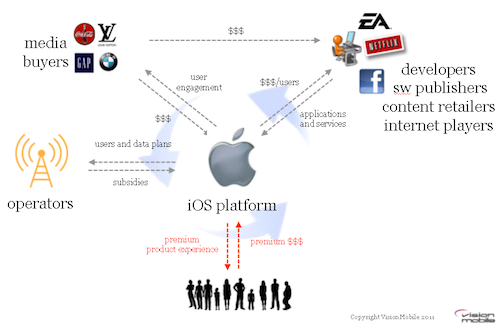 The self-sustaining nature of network effects in the application platform is akin to wildfire: The first burning trees generate enough heat to ignite more trees, that generate more heat, that ignites more trees, and so on.Application platforms have another very important property: The ability to attract external investment by developers. For example, given 400,000 iOS applications and a modest estimation of a $30,000 of development cost per “simple” application, developers, investors and brands have invested over $12 Billion into iOS platform. All this investment has directly contributed to the value that iOS brings in the eyes of users and developers.

Apple iOS set a gold standard for a mobile application platform. It’s hardly surprising that iOS comes from a company with decades of experience in personal computing. iOS is end-to-end optimised for nurturing and reinforcing network effects between users and developers. With each of over 400,000 apps adding to the reasons to buy an iOS device, Apple reported all-time record revenue and earnings for Q2 2011.

For now, Google’s Android is the only close competitor to iOS. Google comes from a background of advertising platforms. An advertising platform is also a special case of a two-sided network connecting two disjoint markets of on-line users and advertisers. It’s hardly a surprise that Android has been designed from the ground up as a free application platform, which is monetised by driving traffic to Google on-line advertising services.

Once the BlackBerry email platform reached significant scale in 2005, RIM introduced a proprietary communication platform, BlackBerry Messenger (BBM) service. BBM is a proprietary instant messaging service that uses the BlackBerry PIN programed in the device to identify users. In other words, someone needs a BlackBerry device to join the social network formed around BBM. It’s like a members-only club for BlackBerry users.

Because of the narrow focus on communication needs, the user-to-user network effects in the BlackBerry communication platform are weaker than those in iOS and Android. Moreover, the benefits of mobile email and mobile instant messaging are no longer exclusive to BlackBerry. Mobile email is used today by 80% of US phone subscribers, and multi-platform mobile messengers such as Whatsapp, Kik and KakaoTalk are quickly gaining in popularity, each amassing audiences of millions of users.

So how does RIM remain competitive? RIM needs to evolve BlackBerry into an application platform. So far, the company has not been successful in achieving this goal. On the contrary, given the direction and speed of innovation of BlackBerry platform, RIM’s chances to achieve this goal looks less and less promising.

Much like Symbian, changing platform focus on the fly proved to be extremely difficult for RIM. Moreover, replacing the legacy BlackBerry OS with the “high-performance” QNX operating system will not make much of a difference. It could even make things worse by making the platform even more fragmented and confusing developers with multiple development alternatives.

Platforms are not born equal

Nokia stood not only on a burning platform, but also on the wrong kind of a platform, trying to reinvent the Symbian software platform as an application platform. The self-reinforcing network effects of iOS and Android application platforms are much stronger than Nokia’s scale and distribution power. The stark contrast between the Q2 2011 Nokia and Apple quarterly results is excellent example of the power of application platforms.

On the contrary, Windows Phone, Nokia’s only hope to get back into smartphone game, has all the characteristics of an application platform: from application compatibility to the steadfast commitment towards app developers. Application platforms are bread and butter for Microsoft. Yet, the jury is still out on whether Microsoft will be able to grow Windows Phone into a credible competitor to iOS and Android.

It is very difficult to displace leading application platforms like iOS and Android which are protected by self-reinforcing network effects and user lock-in (think of firefighters trying to contain large-scale wildfires). It is not enough to be marginally better. To win, Windows Phone will need to offer users and developers something radically new, over and above the current leaders. Only time will tell if Microsoft will be able to achieve that by combining the resources of Skype, the partnership with Nokia and the relationship with Facebook.

Platforms will continue to be a central theme in the evolution of mobile ecosystem. It will only become more interesting with the recent entry of Facebook (social platform) and Amazon (retailing platform) into the mobile scene.

[Michael Vakulenko is a Research Partner at VisionMobile, where he focuses on mobile platform research. Michael has been working in the mobile industry for over 16 years, starting his career in wireless in Qualcomm. Michael has a broad experience across many aspects of the mobile industry, including smartphone ecosystems, mobile services, handset software, wireless chipsets and network infrastructure. He can be reached at michael [/at/] visionmobile.com]

Want to know more about mobile platform strategies and economics? See our Software Economics in a Telecoms World, an executive, 360° seminar on how the telecoms industry is being disrupted by the new software economics.