The Mobile App Store Landscape 5 years Ai (After the iPhone)*

[Where is the app store frenzy heading after all?  Guest blogger Francisco Kattan discusses why it’s a winner-take-all game]

2009 was the year of the app store wannabes.  Following the remarkable success of the Apple App Store, OEMs, mobile platform vendors, mobile operators, and traditional aggregators either created new app stores or repositioned their existing offerings as app stores.  There are now between 24 to 32 app stores depending on who is counting (see Distimo’s app store report and the WIP App Store Wiki for reference), and more stores are surely to follow.  However, key questions remain about how the app store landscape will emerge after the current period of hysteria subsides and the dust settles.

– Are we going to see many app stores on each handset?
– Will app malls emerge to host multiple app stores within?
– Will operator stores gain critical mass?

Andreas Constantinou wrote an excellent article that defines the app store building blocks and predicts a “dime-a-dozen” app store future.  I will build on this post, but will offer an alternative view of how the landscape will evolve. 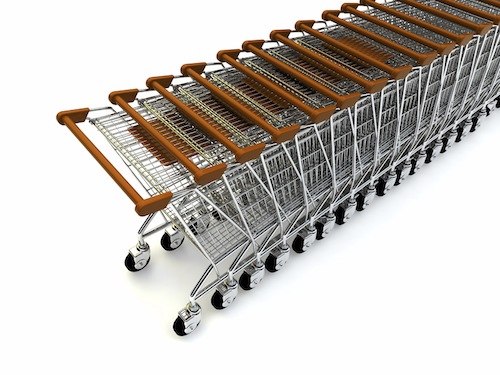 It’s a Winner-Take-All Contest
If we were to extrapolate the current trend, we could expect a future where each handset will host many app stores.   An LG Android device on the Orange network would have the LG App Store, the Android Market, and the Orange App Shop.  The Verizon version would have the V CAST store in place of the Orange App Shop.  On top of this, you could add the Getjar multiplatform store and several specialty stores for say, games, health, and productivity apps to name just a few.  Can you imagine the mess this would create for the user experience?  Which app store do I launch? Which apps do I find on which store? Are apps duplicated on multiple stores?  Are the prices the same across stores or do I need to shop around?  Are the versions of the apps consistent across stores?

Fortunately when the dust settles consolidation will occur and one app store will command nearly all the market share on each device.  Sure there may be a couple “also rans” with a small share, but as history has shown us, these two-sided platform battles tend to result in winner-take-all contests (see definition of two-sided markets here).   We’ve seen similar battles already play out on the web with Amazon winning e-commerce, eBay winning auctions, and Google winning search.

Why winner-take-all markets happen has already been well documented.  Economists Frank and Cook documented this phenomenon with their Winner Take All Society book and Rich Skrenta wrote a nice post on the battle for search supremacy that led to Google’s reign. In two-sided markets there are two sets of users (consumers and developers in the case of app stores) and once both sets of users pick a winner, it is very hard for competitors to gain much share. To cut to the chase, the app store battle in mobile will also result in a winner-take-all contest for the following reasons:

A positive feedback loop cements the ultimate winner.  The more consumers that visit one store, the more developers will create apps for that store, and the greater the economies of scale the winner will enjoy. This battle will play out on a device by device basis with the Apple App Store already the winner on Apple devices (to be accurate, there was no real battle in this case as Apple’s policy does not allow competing stores).  A battle will play out for say RIM devices on the Verizon network (V CAST versus App World), another one for Android devices on the Orange network, etc.  So while we are initially headed for a “dime-a-dozen” app store landscape as Andreas predicted, over time we will see significant consolidation.  And as the number handset platforms themselves consolidate (surely to happen, but this is outside the scope of this post), we’ll have even fewer stores.

The Two Exceptions that Prove the Rule

Think Department Store, not App Mall
Rather than app malls that host multiple stores, the winning app stores will be like department stores with applications organized by category.  Games, health, productivity, entertainment, etc. will be departments within a big store, not specialty stores within a mall.

For clarification I’m defining a “mall” from the point of view of the customer experience, as in the real world.  Customers walk into a mall and discover multiple branded stores, each with its own checkout process.  An example of an app mall is the now defunct Nokia Download. You may recall that Nokia Download (formerly called Nokia Content Discoverer) touted its “advanced shopping mall experience” when it was announced, hosting multiple stores such as Handango and Jamster (called aggregators at the time).

The mall concept does not work because it hurts the user experience for no extra value:  users end up clicking on unknown store brands adding an extra layer of user interface that gets in the way of the app discovery process.  Moreover, if each store in the mall requires users to enter a form of payment the user experience suffers even more.  Although there are more reasons why Nokia Download failed, the user experience of its mall concept was an important factor and as a result Nokia is now busy copying the more successful department store model with the Ovi Store.

This does not mean that there won’t be aggregators behind the scenes.  In fact, the ingestion process could include a publisher like Symbian Horizon or a syndication service like Getjar’s.  However from a user experience point of view, it’s a department store, not a mall.  Amazon is a good model for the winning app stores.  There may be many sellers behind the scenes, but it looks much more like a department store than a mall.  There is one prominent store brand with many departments, a single shopping cart, and a single checkout process.

Will operator stores gain critical mass?
Once upon a time operators had a virtual monopoly for the distribution of mobile applications (depending on the region). Apple changed all that, of course, and the tables are now turned resulting in a developer exodus away from operators (for more on this see My Number One Wish for Operators).   To regain developer mindshare many operators are launching their own “app store style” stores, implementing many of the lessons learned from Apple, including the 70% rev share, developer set pricing, and click-through agreements.  Verizon announced V CAST, Orange has App Shop, O2 is testing Litmus, AT&T has App Center, Vodafone has 360, etc.  But will these operator stores succeed?  I think it depends on the type of device (feature phone vs. smartphone) and on the size of the operator.

Operators lose the app store battle on smartphones, but win on feature phones
Operators have a natural disadvantage to attract developers compared to the smartphone platforms because they are more fragmented.  There are dozens of operators compared to only a handful of smartphone platforms.  Developers are better off working with the small number of smartphone platforms to get worldwide distribution across all operators instead of targeting each operator separately (each with their own SDK, certification requirements, business terms, and fragmented device line-up).  To compensate for this disadvantage operators would have to add much more value with their own stores.  Carrier billing and access to network APIs are areas where operators can add value, but these capabilities are likely to also become available on the native handset stores.  Operators can also differentiate by tapping into their huge advertising budgets to market their apps, enticing developers whose apps are difficult to discover given the unlimited shelf space in the stores.

Another option for operators is to increase store switching costs for their customers by not preloading competing stores on devices they sell.  This would require customers who want to shop elsewhere to find, download, and install other stores on their own.   Verizon Wireless is a good example of an operator trying this strategy.  Verizon does not preload RIM’s App World in favor of its own (upcoming) V CAST store.  However, as operator influence over smartphone providers continues to erode (a trend surely to be accelerated as devices such as Google’s Nexus One are sold directly to consumers), this option will go away forcing operators to truly differentiate their stores, or else. We’ll see how this plays out, but operators will likely lose the app store battle on smartphones unless they find a way to significantly differentiate and do it fast before the native stores consolidate their advantage.

The battle for app stores on feature phones is quite different for two reasons:

Although the smartphone category is where the growth is, there is still a very large and mostly underserved market at the high end of the feature phone category.  These devices have large displays and often full QWERTY keyboards (touch or physical), representing a large untapped market for mobile applications that operators can serve.

However only tier 1 operators are large enough to attract developers to their own stores.  Even tier 1 operators are better off getting together to form a much larger market to attract developers as we have seen with the JIL alliance or the collaboration between AT&T, Orange and America MÃ³vil (just announced at CES).  Smaller operators will have to rely on third party stores that can aggregate applications and syndicate them across multiple operators.  A good example of an operator pursuing this strategy in North America is Sprint.  Sprint has announced that it will remove its own application offerings from its smartphone line-up and will partner with an external aggregator to launch a white label store for its feature phone line-up.  Other operators will have to follow the same approach.

What are your thoughts?  Do you buy into the winner-take-all argument?  Are we going to see app malls or department stores?  What role do you believe operator stores will play?

[Francisco Kattan has worked in the mobile industry for 10 years and has deep expertise across the entire ecosystem, including devices, operators, developers, and content providers.  Francisco has held leadership roles at Edify, Openwave, Adobe, and currently Alcatel Lucent where he is Senior Director, Developer Ecosystem.  You can follow Francisco via his blog, on Twitter and he can be reached at franciscok [/at/] stanfordalumni.org. This post reflects the author’s personal opinion and not necessarily that of his employer.]

* As an aside, the launch of the iPhone changed the ecosystem so dramatically that we need a new way to measure time in mobile.  Any discussion about how the mobile ecosystem works must specify Ai or Bi (After or Before the iPhone) in the same way historians use BC and AD to date events.